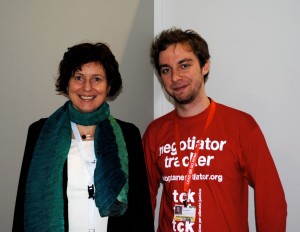 © Ole Seidenberg
The doors of the German delegation are still opened for me..

This conference has just started and for me, it started with an amazing “explosion” of media exposure and exciting meetings – the most exciting being my first interview with my lead negotiator Nicole Wilke.

I had just sent her an email last night, asking for a meeting in between all the sessions she would have to manage and handle at the same time. And there it was: Her reply, inviting me to the office of the German Delegation at 2:30 pm today. I followed her invitation… found my way through the long halls of boxes and containers (really small ones, as if those negotiators actually were asylum seekers 🙂 and finally found the German Delegation’s office booth.

There she was: Sitting in a small corner of a “meeting room”, working on her computer, waiting for my visit. There I was: Sitting in front of her, being exited and stressed, but also well prepared with some “question-munition”.

First question was, how could it be otherwise: “How are you?”…

“Well, we are finally here”, she said…”reason enough to be in a good mood.”

The conversation continued and I found Nicole being quite emotional and excited about Copenhagen herself, not less than any of us trackers and other young & concerned citizens.

However, I obviously didn’t visit her to share some 30 minutes of being “happy together”, but also wanted to get some straightforward answers to questions that had come up during the first day and hours of this 15th Conference of Parties:

– Why have some of our elected representatives in the Bundestag chosen to take money for adaptation to Climate Change from those funds that have long been promised for development aid purposes?

– When does the EU finally play its “financial card”? How can it be that they wait so long to finally come out with some more concrete numbers? And why is it not a reliable 110 billion dollars of public money, but rather a mixture of different, probably unreliable financial sources that they refer to?

– Will it be possible to have a first draft of a legal text in the Annex of this Cop’s final document?

– What does she think about Obama’s visit? – … and the US Environmental Protection Agency’s move to declare CO2 as an “endangerment to public health”?

– How does she feel about the activists actions, the demonstrations that are expected to be happening on December 12th…and in general about the NGO’s work? – …and finally: Her new environmental minister Norbert Röttgen? You can probably foresee that she did not answer all those questions, but also used her professional ability to dodge me were needed in a friendly and diplomatic, but very effective way. However, there is something to be told: She blushed when I asked suggestively: “Well, I am pretty sure you do not support that Germany now starts to take Adaptation money from development aid funds – you told me otherwise in Barcelona just a couple of weeks ago… and I have the feeling that your minister and boss Norbert Röttgen doesn’t like this idea either.”

Indeed, Nicole Wilke had told me in an interview that the EU had promised new and additional money – an interview that I was then not allowed to publish – the environmental ministry even called me on my mobile to tell me so! So what am I – as a young activist – now supposed to think?!? Are those guys just lying to us? Straight to our faces? Are they just turning everything the way they want from one day to the other?

But: There is one slight, but tricky difference, as she told me: It is actually supposed to be “new” money. But new in a sense that it comes on top of what has been transferred before. Not on top of those promised 0.7 % of the German GDP, but on top of those 0.38% that have been achieved (only) by now…. well, let’s check the Greenpeace Climate Math Test that I was confronted with when coming out of the subway station today: It clearly shows: 1+1 is not 1, but 2 – and so we do need extra money for new purposes and extra needs!

Well, dear readers, there is tons of more information that I would love to share with you as quickly as possible – and this post was supposed to be online last night (but the Wifi on our home – the ship – broke down)-… but I gotta run… to the next meetings… keep following as I will keep following and tracking those daring to represent us. I will update this post during the day with more information on Wilke’s answers to our questions and demands…

This website uses cookies to improve your experience while you navigate through the website. Out of these, the cookies that are categorized as necessary are stored on your browser as they are essential for the working of basic functionalities of the website. We also use third-party cookies that help us analyze and understand how you use this website. These cookies will be stored in your browser only with your consent. You also have the option to opt-out of these cookies. But opting out of some of these cookies may affect your browsing experience.
SPEICHERN & AKZEPTIEREN